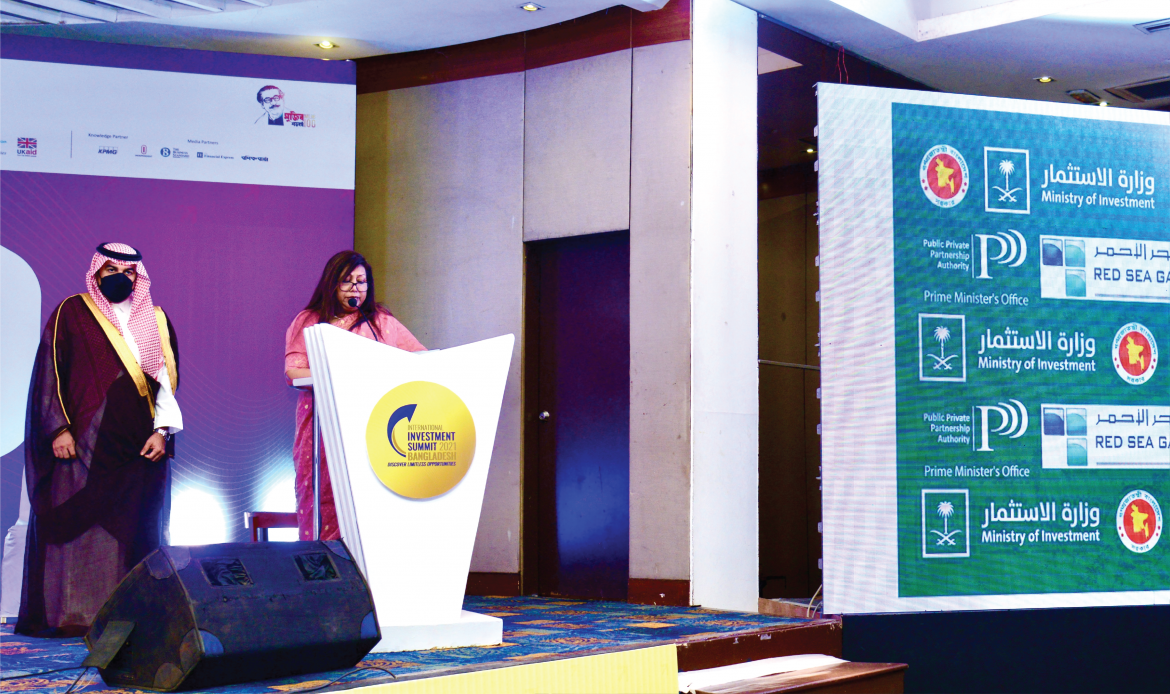 The Ministry of Transport and Logistic Services (MOTLS), Ministry of Investment (MISA) represented by the National Companies Promotion Program (NCPP) of the Kingdom of Saudi Arabia and the Public Private Partnership Authority (PPPA) of the People’s Republic of Bangladesh, recently concluded dynamic discussions on numerous bilateral topics of interest, including development opportunities in the Bangladeshi ports sector on the sidelines of the International Investment Summit hosted by the Bangladesh Investment Development Agency  in Dhaka, Bangladesh, November 28-29, 2021.

At the conclusion of these discussions, the Ministry of Investment expressed its intention to formally nominate Red Sea Gateway Terminal (RSGT) as a PPP investor under the Investment MOU between the Kingdom of Saudi Arabia and the People’s Republic of Bangladesh, signed at the 2021 Future Investment Initiative in Riyadh, Saudi Arabia. The formal nomination under the MOU enables the Government of Bangladesh to directly award PPP projects to nominated companies as per its PPP regulations, following thorough infrastructure procurement processes and guidelines as determined by the PPPA. The Joint Statement represents a significant development in RSGT’s demonstrated interest in exporting its unparalleled, Saudi-born port investment and operational expertise to promising, high growth economies around the world.

The Joint Statement follows an earlier agreement concluded with the Bangladeshi authorities. In July 2019, RSGT and the Ministry of Shipping of Bangladesh signed a Memorandum of Understanding (MOU) under which the largest terminal operating company in Saudi Arabia will invest in and provide operational assistance and expertise to the South Asian nation’s burgeoning ports sector.

“RSGT sincerely appreciates the Ministry of Investment’s expressed intention to formally nominate Red Sea Gateway Terminal under the Investment MOU graciously signed by HE Minister Khalid Al-Faleh, Saudi Minister of Investment and HE Salman Fazlur Rahman, Investment & Private Sector Advisor to the Honourable Prime Minister of Bangladesh. We hold MISA’s intended nomination in the highest regard and consider it as an opportunity to demonstrate the capability of leading Saudi Arabian companies that want to replicate their success and national/regional leadership abroad. It was also a tremendous honor to meet His Excellency Eng. Saleh Al-Jasser, Minister of Transport and Logistic Services, Mr. Omar Hariri, President of the Saudi Ports Authority (Mawani), and Mr. Badr Al-Badr, CEO of the National Companies Promotion Program (NCPP), at the Investment Summit in Dhaka. HE Minister of Transport and Logistic Services Al-Jasser, Mawani President Hariri, and NCPP CEO Al-Badr have always been tremendous supporters of RSGT’s success. Their attendance at the summit, representing the Kingdom’s logistics expertise, was truly special and shows the government’s commitment to the sector” said Mr. Jens O. Floe, CEO, RSGT while discussing the Joint Statement during the summit in Dhaka.

RSGT looks forward to working closely with MISA, PPPA, Ministry of Shipping of Bangladesh, and Chattogram Port Authority to initiate the formal process soon with regards to Patenga Container Terminal setting the stage for investment discussions for larger projects in the Chattogram region.

On the RSGT delegation’s visit to the International Investment Summit in Dhaka, Mr. Floe added that “As an international foreign investor, the support and welcome RSGT has received from the Bangladeshi authorities has been incredible. There is a palpable desire for development and a demonstrated attitude and mindset for proactivity and partnership. RSGT’s proposed investment is a vote of confidence in Bangladesh’s future. We are honored that the Bangladeshi authorities have welcomed RSGT to this procurement process, Bangladesh’s first foreign-involved privatization transaction in the port sector. We look forward to continuing the process and are committed to the partnership.”

Patenga Container Terminal is an under-construction terminal in Chattogram, being developed by the Chattogram Port Authority. RSGT proposes to equip and operate this terminal on a long-term concession from Chattogram Port Authority as landlord, subject to the completion of a formal procurement and negotiation process, satisfactory to the relevant authorities in the People’s Republic of Bangladesh.