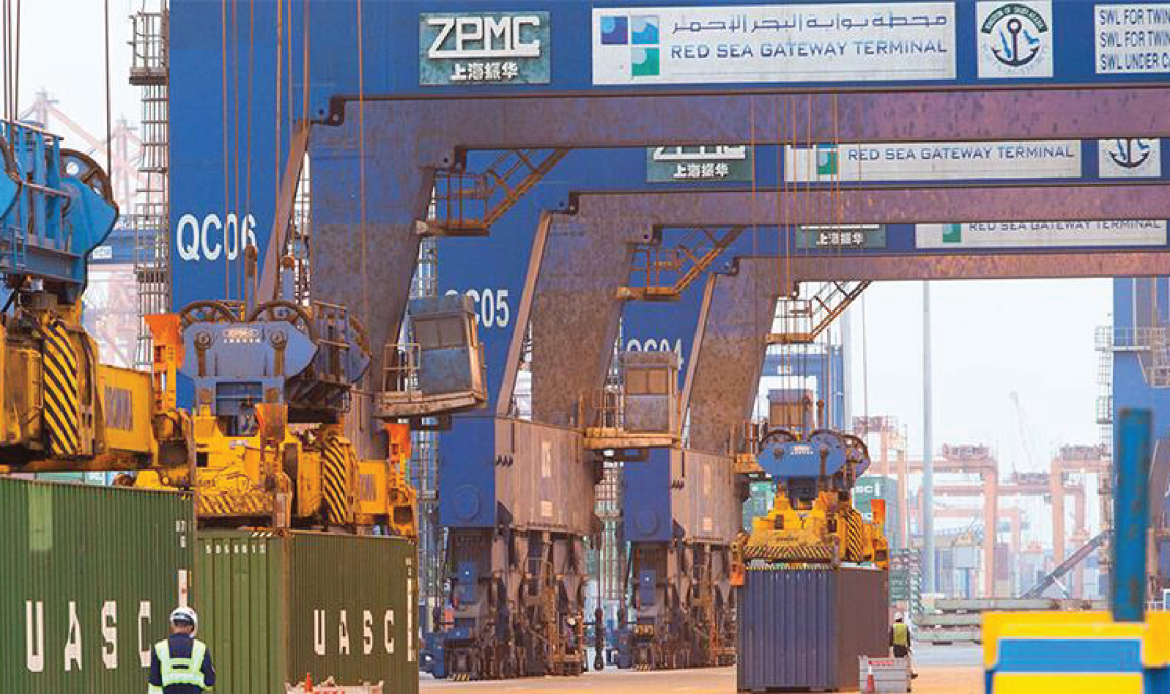 James Baker, Lloyd’s List – SAUDI Arabia’s Red Sea Gateway Terminal is one of the few in the world not suffering from the congestion and slowdowns that have affected much of the supply chain in the past 12 months.

The terminal was “somewhere between lucky and prepared” for the onslaught of demand that has shaken container line schedules.

The preparation came in the form of investments made it its existing facility in Jeddah, in which it has invested $667m since taking the concession in 2009.

The luck was taking over Jeddah’s north terminal concession from Gulftainer just before the crisis emerged.

“Last year was good for volumes due to the acquisition of the Gulftainer’s facilities, which gave a 36% volume growth on the back of that,” the terminal’s chief executive Jens Floe told Lloyd’s List. “This year, growth is a more normal situation, but we expect to have realised somewhere between 10%-15% volume growth by the end of this year.”

That should take combined volumes to around 3m teu by the end of 2021, he said.

RSGT has also been helped by a slowdown in import/export volumes in Saudi Arabia.

“The market we operate in is probably diverging a little bit from those in Asia, Europe and the US in that our local market is soft,” Mr Floe said. “The value of imports in Saudi is going up, mainly on the back of the rise in oil, prices but volumes are down in the local market.

“That being said, we still expect that by the end of the year the volumes will pick up again.”

With domestic volumes down, the uptick has largely been driven by transhipment, which has grown from around 30% of volumes handled five years ago to 60% now.

“The complexities in the shipping lines’ networks are constantly changing, leading to additional transhipment between the mother vessels that go to Europe,” he said. “There is also some local regional transhipment driven by lines taking vessels out of loops to put them into main lane services.

“It is constantly changing. I’ve not seen this many inducement calls in my time in shipping.”

Two years ago, everything would arrive in schedule windows but this year there most vessels were out of their window, he said.

While the existing terminal had enough capacity, the crisis came just as the company acquired additional capacity.

“We have mainly viewed the extra pressure as good luck, because we haven’t had any issues with handling the volumes. Had it been two years earlier, maybe we would have seen similar congestion to that which you see in other places.”

But the terminal is not sitting on its laurels. It has plans to expand operations, including a $1.7bn investment programme, which will increase annual container throughput capacity from 2.5m teu at the beginning of 2020, to 5.2m teu by 2023, and to 9m teu by 2030.

Beyond that, it is also looking to expand its footprint, initially in Saudi Arabia but also globally.

“There are a number of concessions coming up in Saudi, driven by old concessions expiring,” Mr Floe said. “We will be bidding for container and bulk concessions. Population and GDP growth are likely to mean that Saudi will outgrow more established economies.”

It also has an international pipeline of investment opportunities that it has been working on for some time.

“We have bid for a couple of international tenders,” he said. “Obviously things went quite well last year but we expect to see some movement there again soon. We have signed a memorandum of understanding with Bangladesh for a container terminal that we are finalising negotiations on.”

Mr Floe would like to see RSGT become the first Saudi global terminal operator, but admits that this strategy will rely on emerging market opportunities.

“We would have loved to be the Saudi DP World, but I think the time for that is over. The growth in the market is not there any more now that nearly everything is privatised. We see ourselves as developing as an emerging market niche player.

“This is where we feel our competences are best matched with the opportunities that are in the market in the next 10 years.”

But he believes that the decision by the consortium that owns RSGT to divest 20% stakes to both Cosco Shipping Ports and Saudi Arabian sovereign wealth fund PIF, will help to facilitate international growth.

“Part of our strategy around the divestment was to combine the international lobbying ability of PIF and the Saudi government with the ability to attract new volumes by having Cosco on board,” said Mr Floe. “Cosco does allow us to attract cargo that we might not be able to attract without their investment. You don’t have to go out and buy all the market share; some of it you can lock in up front.”